Sometimes, someone who brings light to our life is someone who needs light for their own life.

I downloaded this film a long time ago, randomly and I didn’t know why I had an interest in this film. At first, I thought this film would be happy and bright, because of the title, All The Bright Places. But in the middle of the movie, I realized that this move is my cup of tea. Dark and depressive.

When I saw the male character, I thought I need to find a guy like him. He’s optimistic and caring yet stubborn and selfish. I love the way he brings the light to the female character’s dark world and of course his taste of the book, Virginia Woolf. He knows how to be stubborn and interesting at the same time. He knows many abandoned places that are special and unique. I love his out of box mind to find them. He said Because there are places that need to be seen. Maybe even small places can mean something, for us.

During the film, I enjoy how he can brighten up her world which became dark after her sister’s death. That stubborn and out-going personality successfully drags her out of her world. Despite being a troublemaker in school, I thought he doesn’t have any problem with his personal life until I found out that he is vulnerable inside. He has the dark side on his own, which he can’t control. He has a mental issue which he can’t describe. His past relationship made him become someone who has an extreme mood. He can be really happy and energize at a moment, but at another moment he can be pointless and can’t handle himself.

In the middle until the end of the film, It’s about the male character’s struggle which is overshadowed by the female character’s story at the beginning. I finally understand why he quoted Virginia Woolf, I feel we can’t go through another of those terrible times. His mental state, It’s a defense mechanism that he built to overcome his past. Sometimes, when past events become too much to handle, give us hard time and we want to forget it, our mind will build a shield unconsciously to protect ourselves from getting hurt again and run away from the real problem that we should deal with. Once we built the shield for defense mechanism, It’ll be hard to remove, even though there are million of people who will help us. We are the only one who can remove and destroy it. That’s why, for people with mental illness, most of the time, what they need is understanding and support. Don’t dare to cross their line, unless you know what you’ve crossed.

From this film, I learned that we can’t judge someone’s life from the way they present themselves, the expression, and behavior. We never know what is lying behind their deepest mind and feeling. I had an experience when people told me that I was cheerful and optimistic, but at that moment I was frustrated. I even cut my hair to the shortest hair ever, got blank every time I look up at the sky, and had an idea to give up on life (Hopefully, I don’t have courage to take my own life. Life need courage, but for me to be dead need more courage). There’s the spell from the female character every time she had disappointment and want to run away from reality, We did not remember days, we remembered moments. Maybe, we need to cherish the moment that makes us grateful for life, so every time life gives us lemonade, we can remember that moment.

The last quote I like from this movie is I feel thousands of capacities spring up in me, It’s from The Waves by Virginia Woolf. And the male character said that You’ve got at least a thousand capacities in you. Even if you don’t think so. Maybe, there are a thousand capacities that live inside ourselves, and we need to figure out how to let them out. 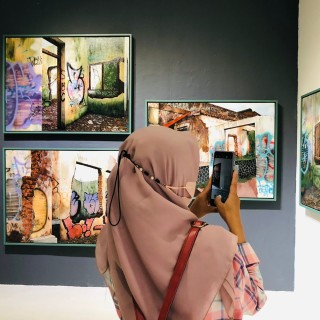 Unpredictable mind with predictable taste of food. Kind of boring person with no sense of humor, have a busy and dramatic mind.